When you hear the rumblings of parties and celebrations throughout our nation for Cinco de Mayo it’s commonly cue to grab a margarita and sombrero when in fact there’s far more to the true meaning and traditions of Mexico’s most popular holiday. Below are the top ways to truly honor (party) like it’s the fifth of May, the Mexican way.

First and foremost you should understand what it is exactly you are participating in! The National Holiday wrongly associated with the day of Mexico’s Independence has exceeded its reach of celebration and could explain the watered down version much of us are accustomed to. As stated before Cinco de mayo is not Mexican Independence Day. It is a day of remembrance in honor of  the the military victory Mexico had over the French on May 5, 1862. The win of the Battle of Puebla is so significant due to the French being one of the most powerful military at the time and the Mexican military consisting of mostly untrained and inexperienced farmers. The underdogs came out victorious and is the real reason behind the why we celebrate the fifth of May each year

When we say dress up it’s not cue to be as cliche as possible. Take off the sombrero and mustache stickers.  It is actually more about paying tribute to the people of Puebla who fought in the war as well as the French Soldiers who were defeated. Organize a neighborhood parade where you march in pride and even tribute the famous French leader Napoleon III seeing as the French invasion was led by the tiny tyrant.  Although it has become a celebration of Mexican culture and pride, the holiday is not such a big deal in Mexico and is not really celebrated outside if Puebla. There are a five traditions you will want follow to celebrate the day like a. 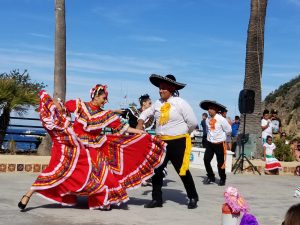 3. Reenact the Battle of Puebla

When you are dressed to par that’s when you and your party people can really go to battle just like true Puebla descendants do every year! The actual residents of Puebla use Cinco de Mayo as a reason to reenact the Battle of Puebla. Since you’re already dressed as warriors, make it an activity to have your guests act it out and have fun seeing who can be the best dramatic actor!

After parading around you’ve surely worked up an appetite that should rightfully be satisfied with authentic Mexican food. To stay in true tradition with what the Mexican soldiers would have enjoyed think about serving plates of mole and Tamales which are filled with corn and vegetables. Another option is to delight you and your guests taste buds with as much fresh guacamole as you want. It’s simple, tasty and could be a fun activity to make as a group.

5. Do a Victory Dance

Throw it way, way back and check out Traditional Mexican Folk dances of the 1800’s to top off the perfectly authentic Cinco de Mayo celebration! One such dance called Jarabe Mexicano usually features 2 men and 2 women. The men dance with their hands clasped behind their back and the women dance while holding up their full and colorful skirts. The dance involves much kicking and skipping and very little touching so partner up and go all out!!

Now it’s up to you and luckily a visit to Redland Market Village will surely provide the ingredients and garments to help you pull it together without spending a fortune! Come see us this weekend!